“Garth, we’re doing well with representation and diversity in Star Power,” I said to him, “but we haven’t had any transgender characters yet.  We should do something about that.” 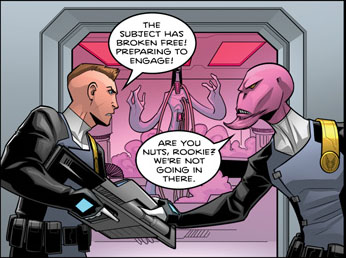 Garth then revealed to me that the Human officer in the above panel, from way back at the start of Chapter 2 of Star Power & The Mystery of the Zel Gux Dynasty, began his life as a female.  It wasn’t included in the script.  It was a detail that came to him as he was drawing “Galactic Defense Officer 1.”  I thought it was a neat little detail and wished Garth had communicated it to me earlier, but in the end I’m glad he didn’t.  If I had known beforehand I may have been tempted to make a big deal out of it, and that would have resulted in us patting ourselves on the back for being oh-so-progressive.

If you go back and read that page, there is no place for that revelation to be made.  There are way more urgent things going on!  That’s been a theme throughout Star Power, too.  There are far more important things happening than the need to blatantly show off how diverse our cast is, and we’re happy about that.  To do otherwise would be making our representation heavy-handed and clumsy, and it wouldn’t feel sincere.  The characters would take a back seat to us, the creators, shoving our oh-so-progressiveness down your throat and that’s an injustice to this or any story.  We’re just going to do it and hope you notice.

So yes, we have characters from multiple ethnic backgrounds and varying sexualities and genders, but that’s not the focus of who they are as people.  The officer in the above panel doesn’t solely identify as a transgender Human.  He is, first and foremost, a Galactic Defense Officer.