I watched Mercury transit the sun on Monday.  This was a really awesome astronomical event for a number of reasons, the big two being 1) it was the first time Mercury had passed in front of the sun (relative to us) in a decade and 2) Mercury was one of the last planets I had yet to spot in my telescope until then.  I finally found you, you elusive little… ahem.

My planetary vengeance aside, it was really awe inspiring to watch the transit.  With a solar filter on my telescope, I watched the little world pass in front of the sun, casting its tiny spherical shadow against the massive backdrop of our home star.  It must not have looked terribly impressive to the casual observer, to see a tiny black spot move slowly in front of a significantly larger yellow circle.  It is the knowledge of what you’re beholding that makes the sight grand.  That tiny black spot was another world, full of its own wonders and features, its own mountains and lakes (yes, there’s water on Mercury!), its own mysteries and secrets.

Here’s a picture I took of the transit.  It’s not a very good picture, but I’m still proud of it.  The uppermost, spherical black dot is Mercury.  The less-spherical dots below it are sunspots. 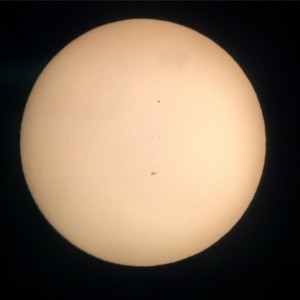 With my successful viewing of Mercury, I have now seen every planet in our solar system save for one.  Only Neptune eludes me now, and that is going to be a significantly harder target.  Challenge accepted.