The most important page.

A new comic page posts every Monday-Wednesday-Friday at midnight U.S. eastern time, but we announce its update on Facebook, Twitter, and Instagram around noon of that day’s new update.  If you follow us on any of those platforms, you’ll see that I called yesterday’s page “the most important page we’ve ever made for STAR POWER.” 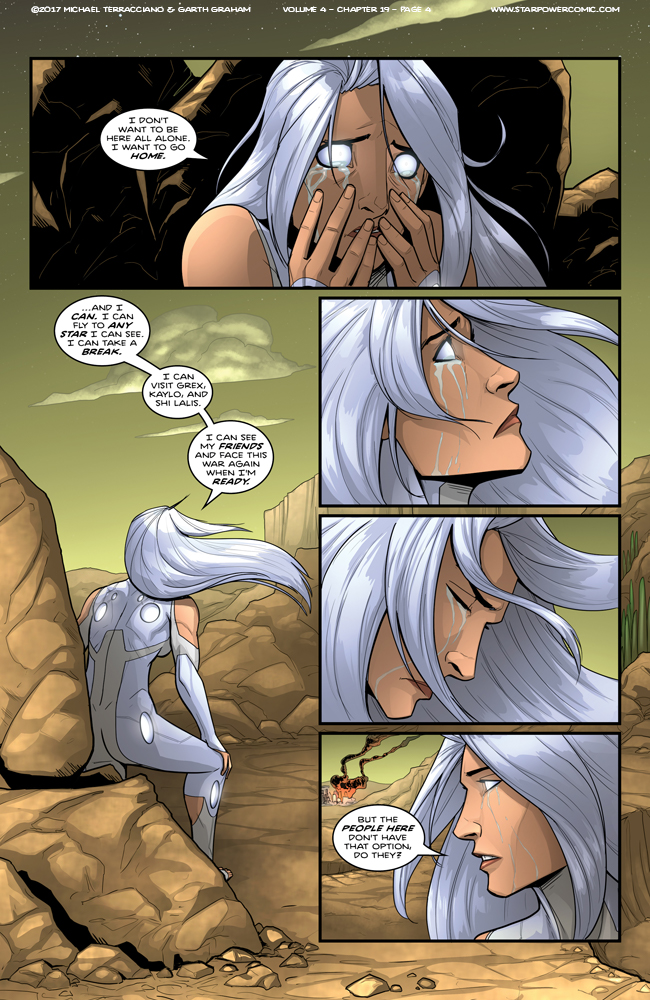 This page is very important to the current storyline for obvious reasons.  Danica has been struggling with her confidence and the weight of her responsibilities as a Star Powered Sentinel since the first chapter, and it all came to a head at the conclusion of the previous Issue.  In this page she faces her fear, and how she deals with it is a turning point for the story and for her as a character.

This page is very important to me for several reasons.  It is a pivotal moment for Danica, facing her fear and letting it pass through her, and emerging on the other side in one piece.  She conquered her fear on her own and made the choice to continue something difficult without having to be convinced.  Finding the fortitude and strength to persevere before seemingly overwhelming odds is heroic to me.  This page also illustrates what we consider heroism:  Danica has a chance to flee, but she realizes that there are those without that opportunity and puts their needs before her own.  She may not know how she can help yet, but she makes the decision to stay and figure it out.  With or without superpowers, the willingness to help others is heroic to me.

Moments like these are the stuff of stories I live to write, and I feel that Garth absolutely nailed it in his illustration.  Thank you for indulging me while I nerd out over stuff that we made.  I hope you enjoy what’s to come.