The return of the revenge!

I’m proud to be counted among the performers in the Boston burlesque scene.  I’m proud to be an official member of The Slaughterhouse Sweethearts, a horror troupe founded by my good friend that has grown into one of the city’s most unique acts.  I am proud to be returning for the fourth consecutive year to REVENGE OF THE ROBOT BATTLE NUNS, the Slaughterhouse Sweethearts’ flagship show and one of the most unforgettable experiences in the Boston burlesque scene. 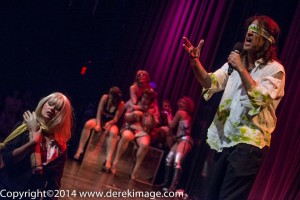 A toxic oracle (me), a maimed reporter, and helpless hostages in Revenge of the Robot Battle Nuns.

Four years ago my friend and the troupe’s founder, Fem Bones, asked me to narrate her show about two travelers in an apocalypse caused by a deadly virus.  There were cannibals, a fox-woman hallucination, a toxic mermaid, and religious cyborgs.  I’d never seen anything like it.  I met some incredible performers and artists, many of whom I still count among my friends today.  As the years went on I was trusted with more and more of the script, and more performers in the scene became more familiar with me.  It all came to a head last year, when I was not only made an official member of the Slaughterhouse Sweethearts, but I was entrusted to streamline the show’s story to such a degree that entire characters and scenes were added, and the ending was changed.  I’m very proud of my contributions to this incredible show. 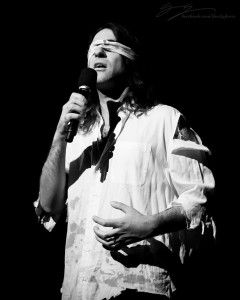 Narrating the insanity of Revenge of the Robot Battle Nuns.

It returns this weekend and for a double-show in July.  If you’re in the Boston area, or would like to take a road trip, get your tickets to REVENGE OF THE ROBOT BATTLE NUNS and experience the beautiful insanity of the Boston burlesque scene at its weirdest.