We’ve been talking about our Kickstarter campaign for about a month now, and relentlessly so.  With this being the final week of that campaign, we’re going to be even more relentless because that’s what you do in the last days of a Kickstarter.  So yes!  Today’s blog is all about the final stretch of the Kickstarter campaign to turn STAR POWER & THE SEARCH FOR BLACK HOLE BILL into a book!

And what a campaign it’s been!  We blasted past our funding goal in two days and hit our first stretch goal in the first week.  As of this writing we’re moving ever closer to our third stretch goal.  We hope to reach it so we can streamline the website to make for a faster, easier reading experience for everyone!  (Our thanks to everyone who’s been patient with us through our recent string of website problems.) 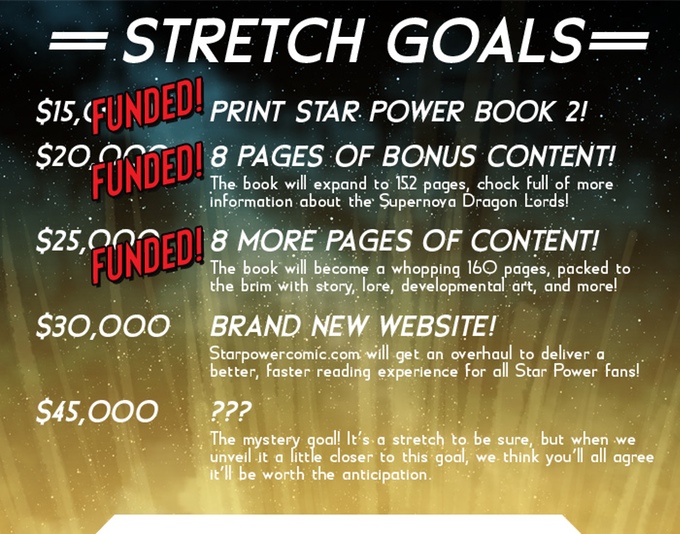 The final stretch goal to get a statue of Star Power produced is a lofty one, but we’re very proud of our Sentinel and believe she deserves to have her own figurine alongside the classic superheroes of traditional comic books.  Besides, everyone looks awesome raising a space sword made of light over their heads.  We think Danica does.

So if you’ve been waiting to pledge your support for this book, now’s the time!  The book will remain, but the exclusive incentives will go away in a few day’s time.  If you’ve already pledged, spread the word that there’s only a little time left!

We couldn’t do any of this without you.  Thank you.